The Tapestry: A Musician’s Journey, at DSO Orchestra Hall 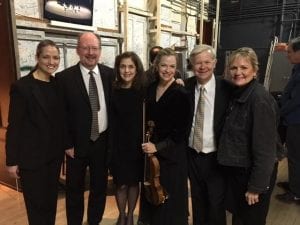 This month is National Adoption Month, and to celebrate it, Spaulding for Children presented The Tapestry: A Musician’s Journey, at DSO Orchestra Hall.  The event celebrated Ann Strubler’s journey to finding her birth parents and discovering her musical and spiritual heritage.

Ann Strubler played in the first violin section for 30 years with the Detroit Symphony Orchestra. During those 30 years, Ann and her husband, Dr. David Strubler, became advocates to find adoptive homes for hard-to-place kids.  This event included a concert and documentary film written and produced by Ann and her musical family:

I love sharing the stories of amazing women who have not only accomplished great successes in their lives professionally, but also personally.  I remember the day after Ann retired, when she shared her dream of creating this film.  Not only did she write a fabulous and important film, her son composed a world-class composition which premiered on the stage of Orchestra Hall by DSO musicians, and it all came together to celebrate National Adoption Month with the Spaulding for Children organization.

Sometimes the Universe supports us in creating something more beautiful and powerful than we could ever have imagined if we just Believe and never give up on our Dream. Ann has agreed to be interviewed in 2017.  I cannot wait to share her personal story with you!

I hope you had a wonderful Thanksgiving holiday and are enjoying time with friends and family during this next 30 days before the new year!