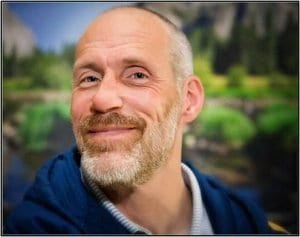 The tears began to flow immediately yesterday as my husband and I pulled up to the church for Kevin’s funeral. I couldn’t believe it — there were hundreds of bikers everywhere – sporting their riding gear and wearing the shirts they wore for the various fundraisers like the Make a Wish ride that Kevin has participated in just a few weeks before riding hundreds of miles on his three wheel bike and using just his left hand and foot.

During the eulogy, many friends and family members shared stories about how Kevin’s had impacted their life.  One friend shared how he had been riding with Kevin and decided to slip by and take a short cut to the camp.  He had arrived back early and had a chance to take a shower and nap.  Kevin arrived back late that evening never complaining.  He learned that since Kevin did not see his friend, he had gone all the way back to the starting point looking for him – adding another 20 miles to his trip that day.  Needless to say, this brought tears to all of our eyes because Kevin never complained.

Just a few weeks ago, I had the pleasure to celebrate my friend Julie’s 50th birthday by watching her jump out of a plane and sky dive. Who do you think was there to join her that morning?  You are right, Kevin drove his specially designed car out to the air strip and even though he wasn’t sure that he would be allowed to sky dive, he had already decided that he would be experiencing this high along with everyone else.  Here is Kevin’s video of him jumping from the plane. He says this was the happiest day of his life.  Today, Kevin is free of his physical body and flying again.  You can help continue his legacy by visiting the foundation set up by his fellow bikers at  www.kevindegenfoundation.org

How can you make a difference and leave your legacy by following your dreams?