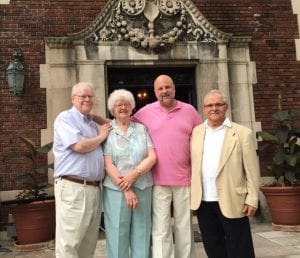 Pictured above L to R are philanthropists, Dick and Gwen Bowlby and Mike Fisher, along with retired Detroit Symphony Orchestra musician/author, Paul Ganson, for the book launch party at the historic Fisher Mansion.

I always keep my eyes open for individuals who are thought-leaders and change-agents to interview, so I was thrilled when DSO patrons, Gwen and Dick Bowlby invited me to the book launch of Detroit Symphony Orchestra: Grace, Grit, and Glory by Laurie Harris and Paul Ganson. The Bowlbys’ created a publishing grant to Wayne State Press for publication of this highly acclaimed book that details the history of the Detroit Symphony Orchestra (DSO) as seen through the prism of the city it has called home for nearly 130 years. The event, hosted by Mike Fisher, was a wonderful reminder of the power of perseverance.

In 1970, Paul set out to save Orchestra Hall, a Detroit gem that had fallen into disrepair and ruin, and was slated for the wrecking ball. What followed was a series of marches, sidewalk benefit performances, and fundraisers over several years.

This was an arduous task. Finally, after 20 years of restoration, $6.8 million, and thousands of donated hours, the DSO moved back to its historic home in 1989 with a sold-out performance by Yo-Yo Ma on opening night!

Being married to DSO French hornist, Mark Abbott, I was able to experience the last few years of the restoration, and today, enjoy weekly concerts in this acoustically perfect hall.

I invite you to listen now to my interesting interview with authors Laurie Harris and Paul Ganson as we delve into the history of this magnificent institution.